"It was'a fantastic show with a great crowd on the FIBO in Germany," reported Marcel Mostert. 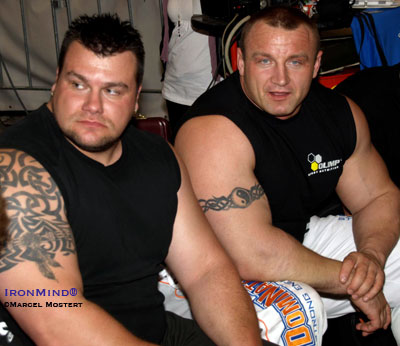 Five-time World's Strongest Man winner Mariusz Pudzianowski (right) was on at hand at the FIBO strongman contest this past weekend, where Jarno Hams (right), unfortunately, had to withdraw from the competition due to an injury. IronMind® | Marcel Mostert photo.


In addition to the competition, Mostert said that strongman fans had plenty to cheer about as Zydrunas Savickas and Mariusz Pudzianowski were there as spectators.

Travis Ortmayer won the overall title, doing what he came for Mostert said.

Tobias Ide "showed his teeth by setting a new German record in the Log Lift [177.5 kg], on his way to winning the first event. Ortmayer answered with a win on the Circus Dumbbell (with 10 reps)." With Ide in for second place on this event, "it looked like it would become a great battle between Travis and Tobias," Mostert said, but "unfortunately Tobias hurt his biceps in the Farmer's Walk," causing him to lose too much ground.

Meantime the Austrian "Deadlift Kid" Martin Wildauer came up with third place in the Medley and a first place in the Wheel Flip! Wildauer is just 21 years old. With his second place finish, Wildauer earned "a place and ticket to the Strongman Champions League competition in two weeks at 9 May in Serbia!" said Mostert.

"Because of the huge success, next year the FIBO will be bigger again and we hope Travis can defend his title then," said Mostert.