Want to see four-time World's Strongest Man winner Mariusz Pudzianowski and another ton or two of top strongman muscle put to the test? And maybe you're planning to be the big surprise at the 2008 Rolling Thunder® World Championships. 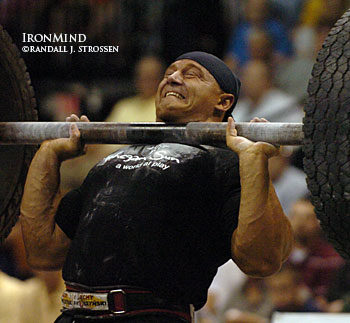 Four-time World's Strongest Man winner Mariusz Pudzianowski will be returning to the Mohegan Sun next month. Notice Mariusz's death grip on the IronMind® Apollon's Axle™, long a staple in leading strongman competitions because of the way it puts grip strength to the test. If you think you've got what it takes, the 2008 Rolling Thunder® World Championships will give you a chance to prove your grip strength against most of the biggest names and top performers in the world. IronMind® | Randall J. Strossen photo.

Mark your calendars, get your tickets and lock in your hotel room before all the best deals are gone.

WSMSS is presenting the 2008 IronMind® Rolling Thunder® World Championships on January 18 and walk-ons, after proving their strength, are welcome, so here's your chance to have fun, rub elbows with some of the biggest names in strongman and maybe grab some glory, not to mention some hard cash.

The next night, get ready for WSMSS Mohegan Sun Grand Prix - it's the kickoff event for WSMSS's 2008 tour and this is where qualification for the 2008 World's Strongest Man contest begins . . . The guys you see when you watch the 2007 World's Strongest Man contest on TV in a couple of weeks got there through the WSMSS, and the dance begins again next year at the Mohegan Sun.

Admission for the Rolling Thunder® World Championships on January 18 is free, and tickets for the WSMSS Mohegan Sun Grand Prix are already on sale.

Hotel rooms at the Mohegan Sun might already be scarce, so here are the three closest alternatives:

Make your plans now - see you there!