Tickets for the second annual Mohegan Sun Grand Prix are on sale now, so if you want to see all but one World's Strongest Man winner from 1997 to 2005, get your ticket now. 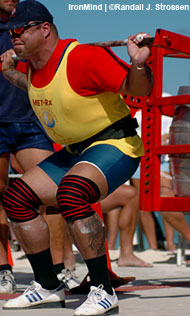 It was only about a week after 9/11, but Jim Davis wasn't going to let a few terrorists stop something as big as his United in Strength strongman contest, and one of the guys who hopped on a plane to compete was Svend Karlsen, who won the contest and then grabbed the mike and declared "It is important that the whole world stand together and show that terrorism has no right!" Svend Karlsen (shown squatting at WSM '04) went on to win the 2001 World's Strongest Man contest and he will be competing at the Mohegan Sun Grand Prix. IronMind® | Randall J. Strossen, Ph.D. photo.

Everyone from Jouko Ahola to Mariusz Pudzianowski will be there, and tickets are available through Ticketmaster and the Mohegan Sun Box Office. Located in southeastern Connecticut, the Mohegan Sun is "one of the largest, most distinctive and spectacular entertainment, gaming, shopping and meeting destinations in the United States . . . and is within easy access of New York, Boston, Hartford and Providence."