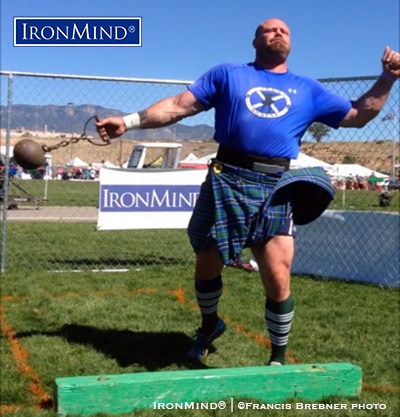 The 2017 Rio Grande Valley Celtic Festival and Highland Games in Albuquerque, New Mexico attracted more than six thousand spectators over a weekend of perfect weather and Celtic festivities on the games’ 20th anniversary. Seventy athletes competed in the A, B and C, masters, lightweight, novice, and youth categories, with a total of 31 field records and 15 world records established.

It was practically a clean sweep in the A group for Michael Dickens of Texas, who established 6 field records, and in the woman’s lightweight class, Teresa Nystrom of New Mexico, who set 15 world records.

Six athletes made the lineup in the A group, including Casey Head, Chad Thompson, Daniel Murphy, Brian Humphries, Thomas Pennington and Mike Dickens.

Thompson and Dickens went all out in the first rounds of the 22-lb. hammer, with Dickens pulling out a crushing throw of 96’ 1” in his final attempt for the win and another field record. Thompson was second with 86’ 4” and Murphy third at 77’ 2”.

The caber toss, at 18’ long and 116 lb., was won by Dickens slamming a toss of 11:55. Second on countback was Head with a 75-degree attempt and third Thompson also with 75 degrees.

The final event, the 20-lb. sheaf toss, was Dickens’s final victory with a height of 30’ and again a field record. Head was second at 24’ and Murphy third at 20’.

Monica Battle did an outstanding job in her first year as the festival director, along with Grant Oliver as vice chairperson and Chad Thompson as the athletic director.