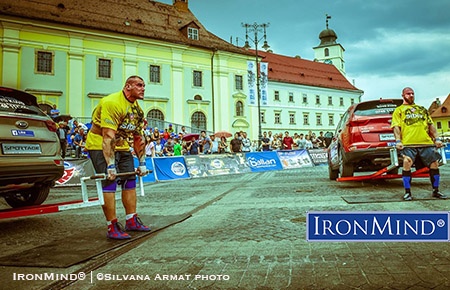 “The polish Power, Mateusz Baron, won his first SCL win ever and he was really proud and happy with that: ‘This was a dream for me,’ he said.”
Holland’s Alex Moonen from Holland, reportedly in great shape at the moment, was second, and Martin Wildauer (Austria) finished third overall.
Again a stage in the MLO Strongman Champions League with a very successful ending.

“We thank the city of Sibiu and especially Andrei Dinu and Sergiu Olteanu for their perfect organizing skills and hospitality,” said Mostert. “This was another stage of the MLO Strongman Champions League with a very successful ending.”


“The next stage of the  MLO Strongman Champions League will be  Curacao, a beautiful and really astonishing place  in the Caribbean islands,” Mostert told IronMind.

“On their sandy white beach there will be some cruel events again, but for the real strongman, this is not a problem. All athletes will fight for more  ranking points to get into the finals in Dubai at 4 and 5 November, where 1 kilogram of gold is waiting for the winner.

“Krzysztof Radzikowski from Poland, the defending World Champion, will be a presence as well, returning to competition following a three-month break due to injury.

“It promises to be fireworks again, so stay tuned to IronMind and the SCL website,” said Mostert.