Victor Kalibabchuk won the first stage of the Mas Wrestling World Cup in Moscow this weekend. 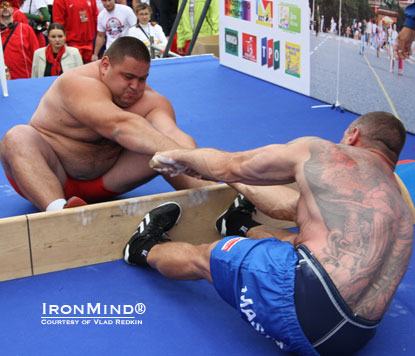 
An ancient sport from Yakutia, mas wrestling “demands great muscular strength from the hands, legs, back and abdominals” according to a description WSF World Cup Strongman director Vlad Redkin sent IronMind.  “Participants taking part in mas-wrestling competitions sit in front of each other, prop their feet against the board that divides the competition area and tug on a wooden stick, making sure to keep it parallel to the propping board. Victory is declared when a contestant manages to pull his opponent over the board and keep the stick in his hands.”

“Next step: second stage of World Cup Mas Wrestling–absolute world championships will be in Yakut, Russia on 6 of July in Yakut–Russia.  Total prizes will be US$20,000.