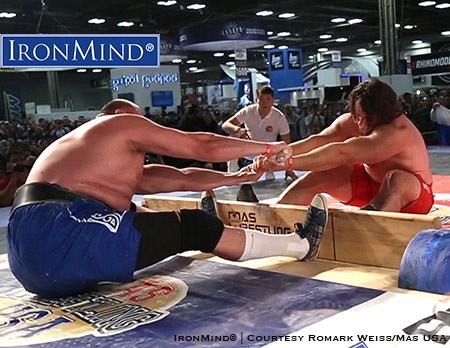 Martins Licis (right) is a favorite to bring back a gold medal from the Mas Wrestling World Championships. The object in mas wrestling is to either pull the stick from your opponent’s hands or to pull your opponent over the center board. IronMind® | Courtesy Romark Weiss/Mas Wrestling USA

Odd E. Haugen, President and CEO of Mas Wrestling USA, and the team leader, told IronMind, “We have a full team, 12 athletes, including Martins Lincis, the reigning Absolute World Champion.”

This is the second Mas Wrestling World Championships that’s truly international, Haugen explained, as the prior competitions only involved competitors from the Eastern Hemisphere and primarily focussed on athletes from the former Soviet Republics.

Haugen, 66 years old, is scheduled for hip replacement surgery in a few weeks, but he said that if he can walk up the steps, he plans to compete since one of Team USA’s athletes had to pull out, leaving a vacancy on the roster.

Haugen said that around 30 countries and hundreds of athletes will be competing and that while Team USA won five medals at the last worlds, none was gold and he hopes that changes this year.

“The focus is on the posterior chain, along with legs, arms, grip, of course, and you are only as strong and your weakest link,” said Haugen.  The sport has been likened to “close quarters tug of war,” and Haugen likes that description.

In addition to its purely physical components, mas wrestling has elements of a combat sport with its head-to-head competition, but since you don’t trade punches or try to disable your opponent, that broadens its appeal.

For more information on the sport, please visit Mas Wrestling USA, and if you’re in Southern California, visit The Training Hall to give the sport a try. 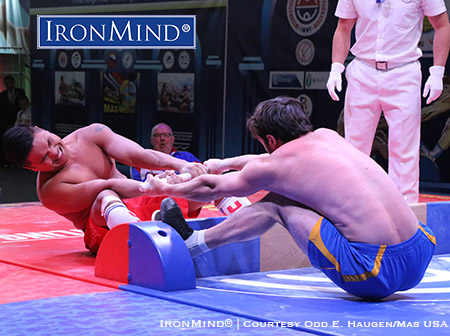