“MAS Wrestling USA’s iconic governing board and fluorescent yellow  Team USA shirts were front and center in the UFC Gym exhibit at the UFC Fan Expo which took place over the holiday weekend in Las Vegas,” Clay Edgin reported to IronMind. 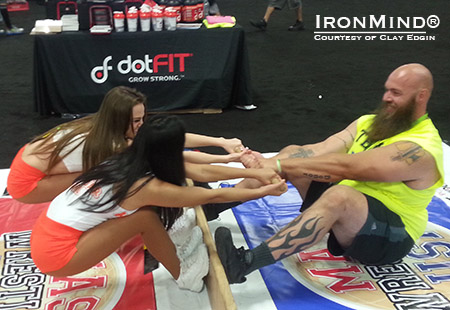 “Two Hooters promotional girls versus one promotional ogre [Clay Edgin].” MAS Wrestling had a strong presence at the UFC Fan Expo in the form of President of MAS Wrestling USA Odd Haugen and Director of Sport Development Clay Edgin, who introduced hundreds of people to the sport and gave several demonstrations themselves. IronMind® | Courtesy of Clay Edgin


“The Mandalay Bay’s sprawling convention floor was the site for the event and gave fans an opportunity to rub elbows with some of mixed martial arts’ best and brightest. An estimated 40,000-50,000 fans had a chance to check out the latest in fight technology and nutrition supplementation from major vendors.

“At the Los Angeles Fit Expo, there were approximately 150 people who tried MAS for the first time over the course of the weekend, but that number was eclipsed the very first day of the event in Las Vegas. The volunteers ranged in age, weight, and athletic ability but MAS wrestling’s inclusive nature meant that everyone got to a chance to experience the sport to the fullest.

“Among the many who took to the platform were legendary UFC fighter Matt Hughes, who had a playful grudge match against Adam Sedlack, President of UFC Gyms. Despite being outweighed by 55 lb., Hughes’ strength was enough to seize the win much to the delight of the crowd that had gathered.

“We were really encouraged by the response that MAS Wrestling got at the expo. There were even a number of people who had heard of it already so we know that all the promoting and marketing we’re doing is paying off.”

“The MAS Wrestling train continues to pick up steam as it pulls into San Jose, California this weekend for the 2014 North American MAS Wrestling Championships as part of the Odd Haugen Strength Classic. Competitors from all over the country will be testing their mettle in an effort to earn one of the 6 coveted spots on Team USA’s squad going to Russia for the World Championships at the end of the year.

“In addition to the competition, the first MAS Wrestling Certification Workshop for Judges and Coaches will take place at the San Jose Fit Expo on Saturday at 8:00 a.m. Attendees will get an in-depth review of the rules, how to organize a tournament, and even get some hands-on training from Haugen, Edgin, and some of the Russian officials who have traveled here just for this event. The cost of the Certification Workshop is $199 and includes membership to MAS Wrestling USA. Reserve your spot by emailing odd@maswrestlingusa.com.

“A special thank you has to go out to the coaches from UFC Gyms all over the country who helped us out last weekend, taking care of signing up volunteers, handing out giveaways, and even jumping in to give expo attendees a worthy opponent on the platform,” said Edgin.