Featuring Ruslan Albegov’s 209-kg snatch, which proved to be the go-ahead lift in the super heavyweight category at the 2013 World Weightlifting Championships, on the cover, the March 2014 issue of MILO: A Journal For Serious Strength Athletes is out—ready to inform and inspire, for your best performances yet. 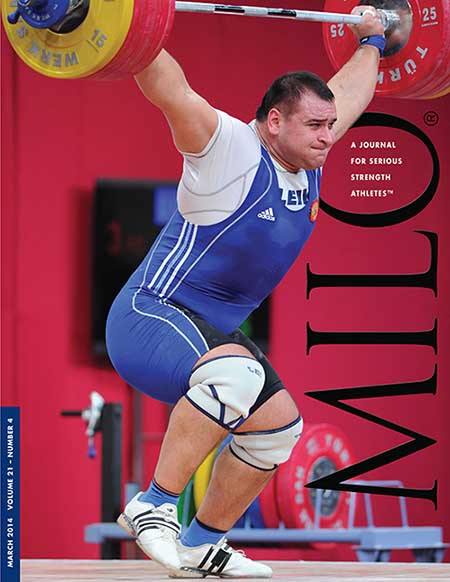 "The go-ahead lift in the +105-kg category at the 2013 World Weightlifting Championships: it turned out that this 209-kg snatch gave Ruslan Albegov (Russia) the margin he needed for victory over a hard-charging Bahdor Moulaei (Iran).  Albegov got the weight overhead strongly, but then he had to take two quick steps forward to save the lift as he stood up."  MILO: A Journal For Serious Strength Athletes, March 2014 (Volume 21, Number 4).  IronMind® | ©Randall J. Strossen photo

Olympic-style weightlifting isn’t the only thing you’ll find in MILO: the March issue also covers the SCL finals, World’s Strongest Man, and training articles on everything from squats and deadlifts to mas wrestling.  All of our usual features are there and this time, our Roudtable Report addresses the question: Does/Would More Drug Testing Save Lives in Strength Sports and the Iron Game?  Plus, iron game history, who’s new on Captains of Crush gripper certifications, the Red Nail Roster, and a lot more.

Here’s the table of contents and if you’re new to MILO and want to learn more, follow this link—MILO: A Journal For Serious Strength Athletes.