“Winter Giants was a huge success, with a couple of minor hiccups but nothing that couldn’t be changed for next time,” strongman contest promoter Denny Felix told IronMind® today. 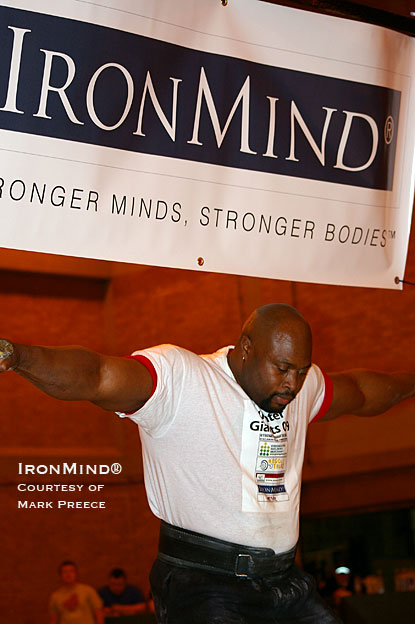 Tapping into the Internet, “400 tickets sold out in record time,” with mentions on sugdenbarbell.co.uk and in the IronMind® News column driving the sales that filled the house, Denny Felix said.

“Athletes were great and the crowd was really enthusiastic," Felix reported, as she began weighing plans for another competition in a bigger venue.

“The competition had many highlights from the British lineup, including Mark Westaby's farmer’s walk, Laurence Shahlaei's 5 Atlas stones and Mark Felix winning the ‘IronMind® Hercules Hold,’” Denny Felix said.  Incidentally, Mark Felix generously gave his IronMind® gift certificate to runner-up Alex Curletto - rumor has it that Mark Felix has won so many IronMind® gift certificates for his top-flight performances in Rolling Thunder contests that he might establish a secondary market for them.

“Jimmy Marku was consistent throughout and 1 point clear of [Mark] Felix going into the last event,” Denny Felix said.

Here are the final points and standings:

Jack McIntosh, who is only 21 years old, received the "One to Watch" award, Denny Felix told IronMind®.

“Really a great day, but the PA system wasn’t working correctly even though we tested it the day before,” said Denny Felix.  Unruffled by the little things that can go wrong despite the best of plans, she's ready to ramp up for round two.