Mariusz Pudzianowski and Glenn Ross have been invited to compete in the Arnold Strongman contest, filling the roster for the 2005 contest, confirmed contest coordinator Terry Todd, Ph.D. 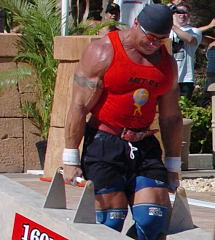 Mariusz Pudzianowski "really seems to me to be a natural choice," said Dr. Todd, citing Pudzianowski's consistently top performances and his tremendous improvement from his first to his second appearance in the Arnold. Regarding the Polish star's recent IFSA suspension based on a drug test, Dr. Todd said that even though he does not know the specifics of the test involved, his understanding is that the test did not follow a WADA protocol, or similar standard, "so the wiser course was to invite Mariusz to the Arnold."

"Everybody is ready to go," Dr. Todd said.