IronMind has just received official word that Mariusz Pudzianowski has been disqualified from the 2004 World's Strongest Man contest "for a breach of the new IFSA Strongman Health Policy." 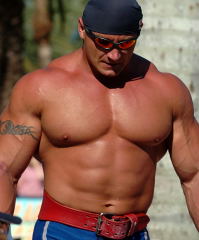 The official statement ended speculation based on what had been unconfirmed but very substantial rumors circulating in the strongman world.

A) A disqualification of Mr. Pudzianowski's results in the World's Strongest Man 2004 including forfeiture of all prize money, ranking points, and associated recognition.
B) A one-year suspension from competition."

The official statement also noted, "The athlete has agreed to enter into a rehabilitation program administered by IFSA Holding's medical team that starts 20th of November 2004," but goes on to explain that, "In recognition of his full and immediate co-operation with IFSA Holdings and its medical team, as well as in view of his previously clean record, the ban may be lifted earlier . . . ."