Telling IronMind® that he was authorized to extend invitations to the Arnold strongman contest while he was at the Mohegan Sun Grand Prix, Odd Haugen said that Mariusz Pudzianowski had turned down the invitation . . . for a reason you might not guess. 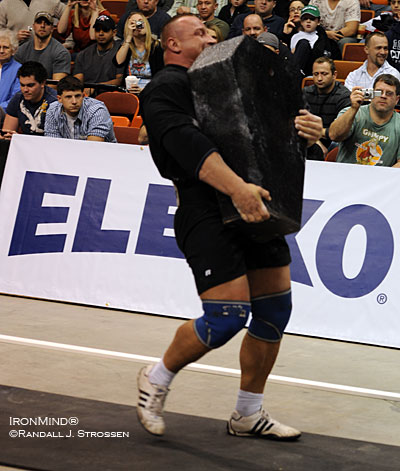 He's used to waltzing across the floor with four hundred pound chunks of steel or stone in his arms, so Dancing with the Stars should be a breeze for four-time World's Strongest Man winner Mariusz Pudzianowski. IronMind® | Randall J. Strossen photo.

His fans surely would enjoy seeing the four-time winner of the World's Strongest Man contest add a victory at the Arnold to his considerable laurels, but it's not going to happen in 2008. And why not? Mariusz is going dancing instead, as in Dancing with the Stars, Haugen said, adding that he had then also extended an invitation to Sebastian Wenta, but that he, too, had declined it.