"You should never say 'never,'" Magnus Samuelsson said, commenting on his announced retirement from the World's Strongest Man contest, but the man known to strongman fans worldwide told IronMind® that he plans to compete in some Grand Prix events next year "if I feel like it." 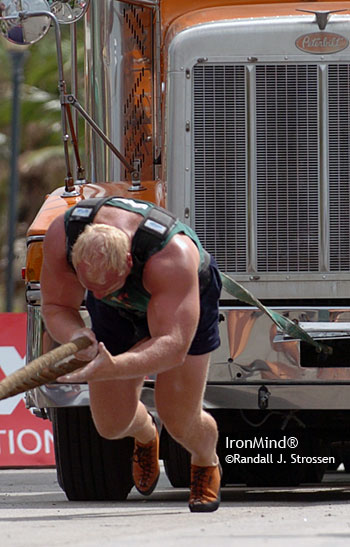 1998 World's Strongest Man winner Magnus Samuelsson has been called the owner of the world's strongest arms, and that includes his forearms and his hands: Magnus Samuelsson is certified on the No. 4 Captains of Crush® Gripper and is a past world record-holder on the Rolling Thunder®. His arms are bigger and stronger than the average person's legs, so when he does a truck pull, we're tempted to call him the man with four legs. IronMind® | Randall J. Strossen photo.


For all the activity in recent years, Samuelsson said that things haven't really changed that much in strongman, and besides noting it as "the original," Samuelsson said that the World's Strongest Man contest is in a class by itself: "Everything else is just a cheap imitation." And to drive home his point about how WSM is set apart from all other strongman contests, Samuelsson estimates that he has competed in roughly 150 strongman Grand Prix contests over his career, "but I am not known for that. I am known because I competed in the World's Strongest Man contest 13 times," and with a little prodding he added, "and won it once."

Driving home his point about the attacks that can develop in strongman, just as elsewhere, Samuelsson drew on a political analogy.

"It's easier to develop hate than deal with a problem," Samuelsson told IronMind®. "It's always easy to develop hate for a person or a thing," he said, adding that, "When you are at the top, you are alone, but the people attacking you always travel in packs."