It's here: The Magnus Samuelsson World's Strongest Arms DVD is your ticket to learning from the guy with arms that are genuinely bigger and stronger than a lot of guys's legs, and hands with the strength to close a No. 4 Captains of Crush® gripper and set world records in the Rolling Thunder® - what more needs to be said? 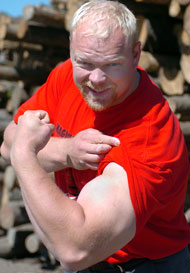 Magnus Samuelsson's name is linked with unrivalled levels of arm and grip strength, and his newest DVD, a Colin Bryce film, shows Magnus training his specialties with fellow World's Strongest Man winner Svend Karlsen, and it features a segment on arm wrestling - including brief coverage of Magnus's match-up with Nathan Jones at the 1995 World's Strongest Man contest.

Magnus's arm is measured on camera, first by Svend Karlsen, in centimeters, and then by Colin Bryce, in inches, and IronMind® had offered to give a free copy of the DVD for the closest guess to what Svend and Colin each measured, and because of some ties, we have five winners, all of who will be getting a free copy of this DVD: Riccardo Magni, Matthew Brouse, Jon Van Tassel, Eric Zucker and Gary Torkeo. Congratulations guys.

In the gym, on events, and just having some fun, Magnus Samuelsson's World's Strongest Arms DVD tells the story behind the most formidable arms and hands we know of - and given the circles we travel in, that's saying an awful lot.