1998 World's Strongest Man winner Magnus Samuelsson told IronMind that his training is going extremely well, and summing up the situation, he said, "I'm pretty much the strongest I've been." 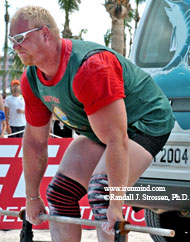 Magnus Samuelsson on the truck deadlift at the 2004 MET-Rx World's Strongest Man contest (Paradise Island, Bahamas). Interestingly, Magnus says that the same training principle has helped him with both his deadlift and his grip training. IronMind® | Randall J. Strossen, Ph.D. photo.

Magnus Samuelsson, one of the most popular and widely-recognized competitors on the professional strongman circuit is best known for his upper body strength, and particularly for his otherworldly levels of arm and grip strength. As an indication of what he meant in terms of his current strength levels, Samuelsson said that he recently bench pressed 280 kg in training - this was done touch and go, no bench shirt.

As another indication of his grip supremacy, Samuelsson, who was a top arm wrestler before he turned to strongman, is also known for lifting world record-level poundages on the Rolling Thunder.

Magnus Samuelsson has a DVD on his arm and grip training, appropriately called "World's Strongest Arms," but don't think this means he isn't happy to discuss his training and pass along tips. And one thing he said that has really helped him lately, on everything from his deadlift to his grip work, is mixing short breaks with his hard training.

"If I focus on the deadlift and train it hard, first I make progress and then it starts to go down. If I rest at this point and then come back to it, my results go up again.

"It is the same on grip training for me," Samuelsson said.