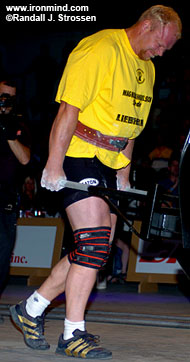 "At times, my bench press was up a little, but then my deadlift was down, " Samuelsson said, but right now, the man known for having the world's strongest arms confessed to being "a bit happy," because considered in aggregate, he is the strongest he has ever been.

The two-meter tall 147-kg strongman said that although his bodyweight remains about the same as last year, he is a bit leaner, which he attributes in part to a change in his diet which now includes "massive amounts of protein."