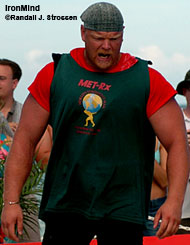 Known for having the world's strongest arms and grip, among other things, Samuelsson is quite a bench presser, as well, and as an indication of his current strength levels, the 1998 World's Strongest Man winner said he would have no hesitation about going for a 300-kg bench press on a stage in front of thousands of people - no shirt, just touch and go.