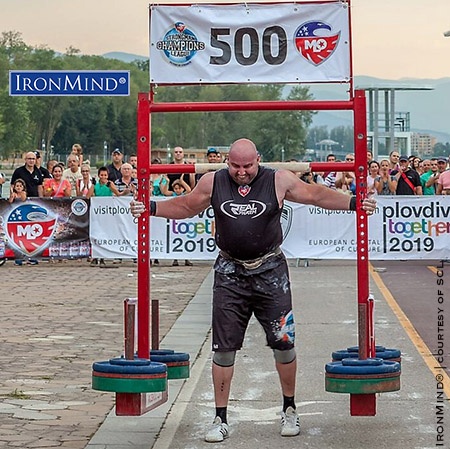 With temperatures of 40 C/104, Bulgarian strongman Stoyan Todorchov blazed to three new world records in from of the hometown crowd filling the arena.

“First he did the farmer’s walk, 400 Kg over 25 meter and broke the distance of Stefan Solvi Pétursson, set at SCL Guinness World records in China this year, and his time 16.65 seconds goes in the books as a new world record, also.

“After the second event log lift for reps, he had recovered and Stoyan set a new world record with the Yoke Race for Max with 500 kg, walking 16.50 meter without a drop.

“May I say that the man was fired up totally by his own crowd!

“This competition was very exciting, because with one event to go, there were still 5 athletes who could win the title, and Stoyan was tied with Matjaz Belsak, but in the end, Stoyan beat Matjaz by one point.

“Again we did set some new standards here and we invite others try to break them.

Stage 8 is next: SCL England,” said Mostert.  “Let’s see who can win the title.”