Zyrdunas Savickas, featured on the Plane Pull at the 2009 World’s Strongest Man contest, is the cover man for the March 2010 issue of MILO. 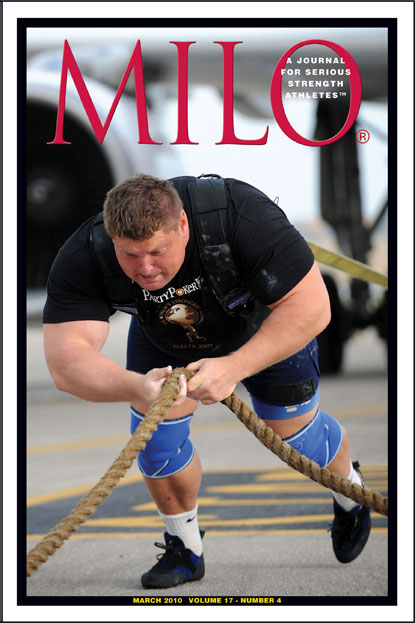 “Minutes before the finals in the 2009 World’s Strongest Man contest began, Bill Kazmaier nodded toward Zydrunas Savickas and said to Randall Strossen, “If there’s one man on the planet who deserves to win this title . . .  .”  Zydrunas Savickas is strong in just about any way that you might reasonably assess strength - he’s a proven player on overhead presses, squats and deadlifts, and yes, he’d won virtually every big strongman contest on the planet, so wasn’t it about time that he won the biggest of them all, the World’s Strongest Man contest?”  - cover caption for the March 2010 issue of MILO: A Journal for Serious Strength Athletes.  IronMind® | Randall J. Strossen photo.

For people, how about David Barron profiling Mike Zolkiewicz - the man who is rewriting the record book for the 56-lb. weight for height - and Michael Corlett introducing traditional strongman Stanless Steel.

And for training, MILO®’s core, we have things covered from soup to nuts - the established authorities, up-and-coming authors, as well as some writers you’ve probably never heard of before . . . all united by the passion and knowledge that characterize MILO® contributors.