Staged in front of a large audience, MHP Strongman Champions League brought 10 top strongman competitors to Estonia this past weekend and then put them through their paces with six challenging events. 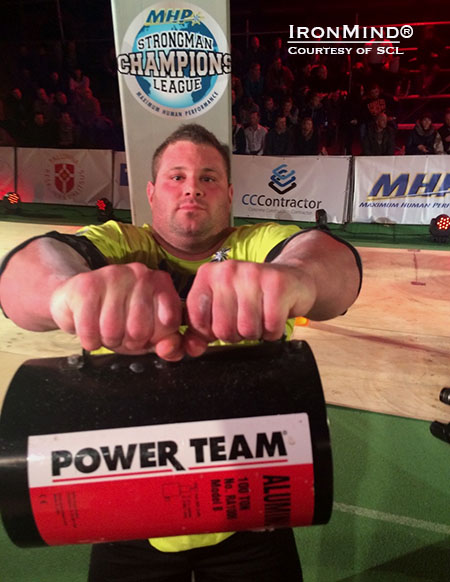 Martin Wildauer was second at MHP Strongman Champions League–Estonia, which was good enough for him to maintain his lead in the race for the 2014 season title. IronMind® | Photo courtesy of SCL

Hometown hero Rauno Heinla won the competition and Ilkka Kinnunen told IronMind, “Rauno Heinla is in excellent shape.  He won the Lithuanian stage of SCL two weeks ago and now he has his second victory in a row.
“The events were tough. The first event was a medley where the athletes carried a 385-kg Yoke for 10 m, continuing with a 150-kg Farmer’s Walk for 10 m and then ending by carrying a 125-kg IronMind sack [sandbag] for 20m. Top three: Kryzsztof Radzikowski 27.10sec, Martin Wildauer 28.31sec, Markus Mannik 29.10sec.

The Forward Hold with the original SPX cylinders, 25 kg total and leaning against a pole, was the fourth event. Björn Solvang did the best time (66.82 sec), then Vidas Blekaitis (56.60 sec) and Kryzsztof Radzikowski (53.88 sec).

“By taking second place in the competition, Martin Wildauer kept the yellow Leader shirt, although Kryzsztof Radzikowski, third place, is closing the gap. The organizers Rammumees Marek Tobi, Janek Tobi and Elviira Eessaar and their crew did an excellent job and also big thanks to Andrus Murumets to helping during the competition.

“Next to come is the MHP SCL Malaysia. The Final gives athletes double points, so everything is still open—who will be crowned at the end for MHP SCL Champion 2014?” asked Kinnunen.

Emphasizing the importance of the battle that is shaping up for the season championships, Marcel Mostert said, “Keep in mind here that Martin Wildauer is in first place for the 2014 SCL World Championships title in Malaysia, leading Krzysztof Radzikowski by 25 point and Ervin Katona by 27 points, but the Malaysia is double points, so the winner gets 50 points. All is possible.”

Also up for SCL is the first broadcast of SCL Zambia this coming Thursday, October 23, at 22.00 hours on Eurosport.