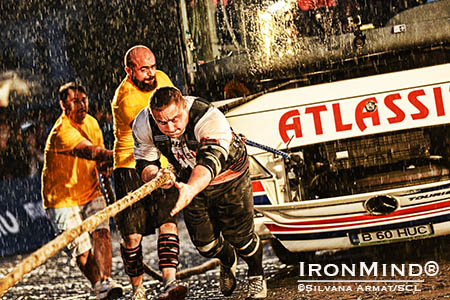 Ilkka Kinnunen: “Here is a great shot of the Bus Pull in Romania. As you can see it was
raining like hell, but we all survived and the IronMind harness did the job :-).” IronMind® | ©Silvana Armat, courtesy of SCL


“Last weekend in Sibiu, Romania, he took the victory over a two-day competition.
The first day it was raining, the second day was shiny and full of sun, especially for Krzysztof.

“It all began with a start in the rain during the Bus Pull. The rain was an extra disadvantage for the athletes because it made the event very difficult on a slippery surface, but the pictures looked awesome. So was the  the crowd that stayed until the bitter end in the rain. At least 5,000 spectators were witness of the great spectacle the MHP Strongman Champions League showed here for the first time in their city.

“The events were heavy, especially the deadlift with a van of 2200 kg to lift. Until the last event, Ervin Katona was leading, one point ahead of Krzysztof. Unfortunately , Ervin injured his left biceps during the stones, so he had to give up his leading position and the win overall to Krzysztof.
“Ervin and Martin ended both at 50 points, but Ervin had more wins and took second place overall.

But, because Martin Wildauer ended third in overall, Ervin Katona was able to take over the yellow MHP leader shirt in the SCL ranking. He leads now with 162 points, two points ahead of Martin and 15 points ahead of Krzysztof.

“It will be exciting until the MHP Strongman Champions League finals on November 15 in Malaysia: Who will be crowned as the absolute world champion 2014?

“Overall, it was a great contest, the stage was great and the spectators did love to see the big strongmen in their town—all perfectly done by the organization in Sibiu, so we loved to work with them and we will be back there for sure next year!

The next stage of the MHP Strongman Champions League is in Vilnius, Lithuania, October 4 and 5.”