Goyang, Korea - Lu Yong was the last member of the Chinese men’s team to compete at the 2009 World Weightlifting Championships and with his teammates having won the first four men’s classes, he had a tradition to uphold. 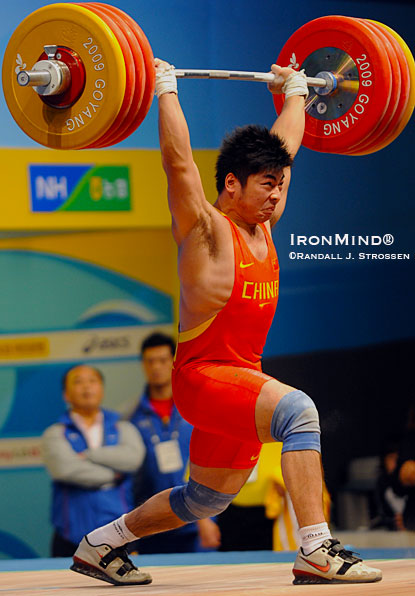 
Lu Yong left no doubt that he was there to put another win in the Chinese column as he snatched 170 kg and then 175 kg before missing 177 kg, a string that gave him the gold medal in the snatch.  Tigran Martirosyan (Armenia) smoked 172 on his opener - the highest of the class - but then missed 176 kg, provoking an unrestrained tongue lashing from his coach.  Whatever was said wasn’t enough to turn the tide for Martirosyan, because he missed the same weight on his third attempt, and didn’t start in the clean and jerks.  Siarhei Lahun (Belarus), substituting for a recently injured Andrei Rybakov, did himself proud, as he made three good snatches, ending up with 171 kg, which earned him the bronze medal.

Lahun had executed his snatches with workmanlike precision and he continued his pattern in the clean and jerks as he put away 200 kg, 205 kg and 209 kg.  Martirosyan’s teammate, Gevorik Poghosyan, had secured a medal in the clean and jerks when he succeeded with 208 kg on his second attempt, but he called for 211 kg in an effort to move to the top of the list, although he only deadlifted the weight.  Now it came down to Lu Yong, who had one shot at overcoming Lahun in the jerk, and when he rammed the same 211 kg overhead, it looked like it was going to be a good lift - instead, he lost the lift behind.

Maybe the miss was a disappointment, but Lu Yong had met his top priority - China had a perfect record:  Five men’s classes entered and five gold medals in the total.