Louis-Philippe Jean got married on Sunday, but leading up to his wedding, he was training so hard with groomsman Derek Poundstone, that LP said he could barely walk down the aisle. 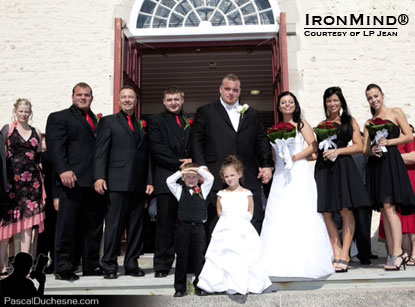 
“Derek [Poundstone] was a groomsmen and Kristin [Poundstone] was there too   . . . you probably know my best man, Michel Chartier, the doctor who follows me on each international contest.  We married at the church Saint Charles Borome, one of the oldest churches in the city of Quebec.  Built in 1880.  Kim Des Besquet , and I are now married!!  Garrick Daft also came down from Columbus, Ohio, which was the farthest of my guests!"

“I was with Derek and at the end we decided to train really hard at the gym. We did a 340 log 4 sets of 3 - 90 sec rest, strict press and clean,” said LP, explaining that this was part of a three-day grind.