A few weeks ago, the strength world was focused on the World Weightlifting Championships and the World's Strongest Man contest, but - quietly - off to the side of these events, something else was brewing. 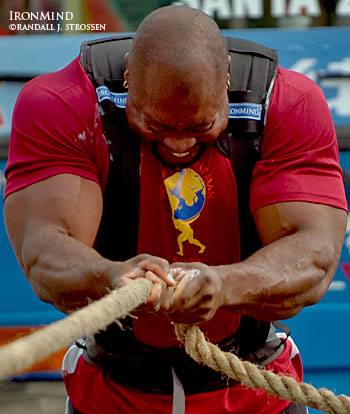 Speaking as someone who has more than an academic interest in and understanding of these things, Lene Karlsen reported to IronMind® that it was decided that Mark Felix had the World's Largest Hands, followed by Phil Pfister and Svend Karlsen. Well, just as your spam likely indicates, size does count for something and Mark Felix is turning those amazing mitts of his to the Rolling Thunder®.

Mark Felix's wife, Denny, told IronMind®, "My husband has finally realised he should put eggs in other baskets, so I bought him one of the Rolling Thunder® Deadlift Handles and he is very excited. Looking at the record, I'm thinking he could break it easily."

Not merely misplaced wifely pride, Denny is right on the money with this: First day out, Mark hit 260 pounds, which we have seen on video, and then, Denny said, "He got a couple more lifts taking it up to 271 lb."

The Rolling Thunder® world record is currently held by fellow Brit Laine Snook, at 274.2 pounds, so we're looking for a possible matchup of these two powerhouses either later this year or early next. Stay tuned.