It's a tradition in Columbus, Ohio: Armwrestling opens the Arnold Expo on Friday and Saturday, and 2006 promises to kick off things in grand style as the armwrestling competition is set to bring in record numbers and top talent from around the world. 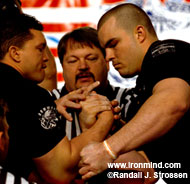