With his deep roots in strongman's glamour event, Colin Bryce - as head referee - is among the familiar names staffing the key positions at the 2005 MET-Rx World's Strongest Man contest. 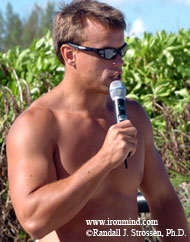 Bryce is replacing the very man who introduced him to the show in 1996, Dr. Douglas Edmunds, although Bryce is quick to say, "I will be trying to fill colossal shoes and a huge hat," referring to Dr. Edmunds's stature in the sport and his signature black hat.

"Nobody could really do that," Bryce added. "Douglas Edmunds is a huge figure in the sport," said Bryce, who emphasized his indebtedness to the man who is regarded as the godfather of strongman.

Bryce himself is no lightweight, and even though he modestly only acknowledges that he, "carried it a good ways before they told me to put it down," Bryce created quite a buzz at the 1997 WSM contest when, as a tester and much lighter than the average competitor, he was informally credited with notching up the longest distance in the Husafell stone.

Since his days as a tester, Bryce has worked as an emcee at World's Strongest Man, and this year marks his debut as the chief referee.

Two-time World's Strongest Man winner, and still one of the most popular winners ever, Jouko Ahola will be in charge of the equipment, backed up by an all-Finnish support team.

Mr. Strongman himself, Bill Kazmaier, is the presenter, and TWI vice chairman Barry Frank, the man who created the World's Strongest Man contest, will personally be on hand as well.