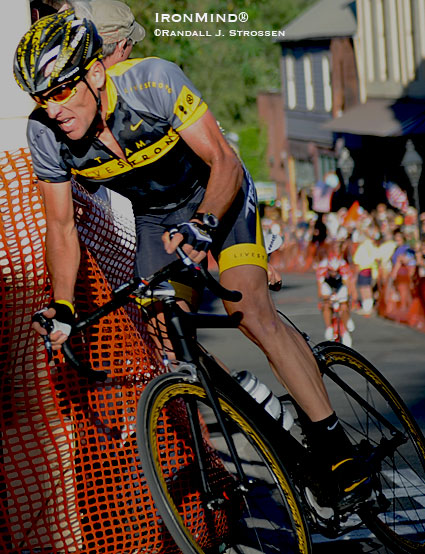 Nevada City, an historic California Gold Rush town with a population of 3,000 people, drew an estimated 30,000 wildly-cheering fans for its traditional Father’s Day bicycle races.  The Nevada City Classic, one of the longest-running bicycle races in the United States, is known for its punishing course in this picturesque setting, and it has been won by such elite cyclists as Greg Lemond, the first American to win the Tour de France.

Armstrong, who came out of retirement to chase his eighth Tour de France victory this year, rode in a three-man breakaway consisting of himself, teammate Levi Leipheimer, and Ben Jacques-Maynes, who, previously unknown to much of the crowd, was dubbed “the Bissell Team guy."  When Armstrong decided to drop the hammer, he motored away from the break, and he ended up winning with a 21-second lead over Jacques-Maynes, who beat Leipheimer by 1 second.

Nevada City is being considered for a stage of the 2010 Amgen Tour of California, a stage race that draws some of the world’s top names in cycling.