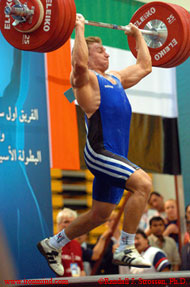 Kuznetsov and Sufyan Abbas Nader (Qatar) looked to be the frontrunners in this class and they ended up finishing gold and silver, respectively, across the board.

Nader opened with 150 kg in the snatch, but it was too far out front to save. Kuznetsov opened with the same 150 kg for a good lift, although he had to run forward a couple of steps to control it. Nader, who was lighter, responded with a very nice 150 for his second attempt to move into the lead. Kuznetsov made a good lift with 155 kg on his second attempt, to move into first, and Nader took the same weight on his third attempt, pulled it high enough, but it was out front and even though he chased it, he couldn't save the lift. Kuznetsov took 158 on his third attempt, looking to increase his lead, but he couldn't fix the bar overhead.

Kuznetsov opened first in the clean and jerk, with a good lift with 181 kg. Nader has a strong clean, but the jerk has let him down more than once, so when he got on the board with his opener, 186, it probably took a lot of pressure off him. Kuznetsov missed the jerk on his second attempt, 190 kg, after noticeably oscillating the bar, and on his third attempt, going straight into the jerk as he recovered from the clean, he nailed the lift.

Nader had been waiting it out, and now he had two shots at the gold medal in the clean and jerk, and in the total, but the jerk with 195 eluded him both times - on his second attempt, he had the bar overhead, but out front, and he couldn't chase it down, and his third attempt wasn't as close.