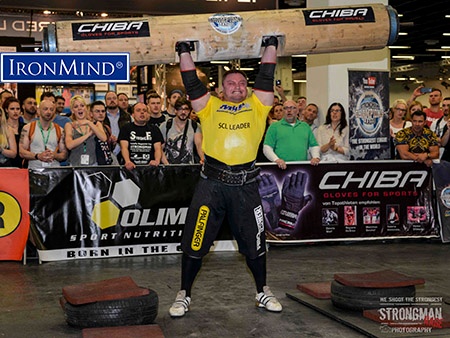 Krzysztof Radzikowski breaks the giant log lift record at the second stage of the MHP Strongman Champions with 206kg. The traditional log has a diameter of 32cm and the giant log has a 36cm diameter and is 3 meters long. IronMind® | Photo by Aryn Lockhart/Strongman Rage

Before heading to the World's Strongest Man contest, Krzysztof Radzikowsi broke the strongman world record on the giant log at SCL FIBO. Aryn Lockhart reported on the action for IronMind.

The second stage of the MHP Strongman Champions League was held in Cologne, Germany at the FIBO, the largest fitness expo in the world. The competition was a fight to the finish with Krzysztof Radzikowski barely taking the win over Matjaž Belšak in the final event. In addition to the fight for first, the competition broke two records and tied another. Radzikowski broke Zydrunas Savickas’ Giant Log world record with 206kg, Belšak broke the FIBO Atlas stone record previously held by Travis Ortmayer and he also equaled the FIBO record for the circus dumbbell tying Vytautus Lalas’ record. With four of the 14 athletes headed to World Strongest Man in just a week, this was an impressive preview of what lies ahead.

The competition hosted 14 of the strongest men in the world through six events. The day began with the Giant Log. What makes this world record unique is the log is not standard. This giant log is longer and has a wider diameter. A traditional log is 32cm in diameter whereas this one is 36cm, additionally this log is 3m long. Radzikowski dominated this event taking the world record and making 206kg look easy. Dainis Zagaris and Matjaž Belšak finished in second with 185kg.

The next event was the Bavarian Stonelift. This is an event most international athletes have never seen before. The traditional strength event can be found throughout Bavaria (southern Germany) and Austria and consists of lifting a heavy stone a meter high. If athletes meet the one meter mark, more weight is added for the next round. Andreas Altmann who holds the world record in stone lifting won the event lifting 350kg for 87cm. Martin Wildauer, who holds the strongman stone lifting record was close behind with 75.3cm. The surprise from this event was Dainis Zagaris. Having never competed in stone lifting before, he impressively lifted 350kg 71.2 cm.

The third event was the medley. Athletes carried a 400kg yoke for 20m and returned with a 110kg sack loading it onto a platform. Radzikowski again won this event with a fast 21.27 seconds. Alex Moonen took second with 24.56 seconds and Belšak took third with 25.07 seconds.

Event four was the 87kg circus dumbbell for reps. Again a larger than normal dumbbell, Belšak won this event with an impressive 14 reps. He tied Vytautus Lalas’ FIBO record. Both J.F. Caron and Razikowski tied for second several reps behind with 10.

Belšak continued his impressive streak winning the atlas stones and breaking the FIBO record previously held by Travis Ortmeyer. Belšak completed the 5 stones ranging in weight from 140kg-180kg in an amazing 19.89 seconds.

The final event was the 350kg tire deadlift on the main stage. The win would be determined by this event. Radzikowski needed eight reps to win. In the final seconds, he struggled but completed his eighth rep taking the win by a single point. Radzikowski, Belšak and Caron all finished this event with 8 reps.

After a long day of competing, I interviewed Radzikowski. He was exhausted saying that every event at the FIBO was heavy, but he was excited to take the win. He stated, “Winning FIBO is something special. It is one of the most important competitions because this is the biggest expo in the world.” He also talked about the unique experience of trying the stonelift. “Stonelifting is something new for me. I know nothing about this.”

The final top standings ended with 1. Krzystof Radzikowski 2. Matjaž Belšak 3. J.F. Caron. The top three winners from the FIBO are headed to world’s strongest man in the next week. Belšak stated, “I’m very happy with my first event this year.” This strong showing illustrates there are definitely some wildcards for World’s Strongest Man just around the corner.