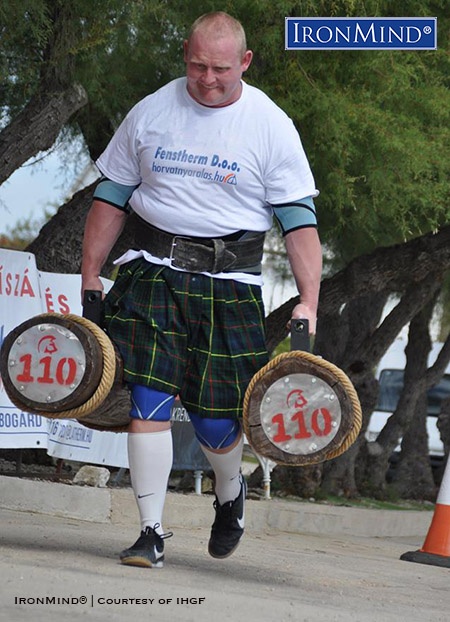 In the stone lift overhead, the athletes pressed a 250-lb. stone as many times as possible in 75 sec., a tough event for some of the athletes because of the stone's awkward shape. Only two athletes succeeded in this electrifying event: Kiss locked out a remarkable 2 reps, and van Antwerpen did 1 rep.

The 56-lb. weight for distance was a ding-dong battle between Kobylarz and van Antwerpen, with Kobylarz marginally claiming victory with a distance of 42' 9" over van Antwerpen's 42' 1"; third was Langhorst at 40' 2".

The final event, the Atlas stones for reps, would decide the winner, and the athletes were required to lift an Atlas stone weighing 337 lb. over a 4' bar for reps. Burke attacked, pumping out a total of 7 reps to tie van Antwerpen; third place was a three-way tie between Langhorst, Kobylarz and Kiss at 6 reps. Kobylarz managed to hang on to the overall title by a mere point over van Antwerpen.

Adam Darazs of Hungary, IHGF partner and promoter of the event, noted that the spectators really enjoy the concept of combined strength and throwing events, which is also good viewing for the TV audience. IHGF's Francis Brebner noted that an exciting and unique location for next year's IHGF Strength Games World Challenge in Europe is being considered.