Combine a star-studded field with a picturesque setting and you have a new high water mark for the Highland Games in Belgium, where Ken Lowther won the 2010 International Highland Games Federation (IHGF) World Pro Masters Championships this past weekend. 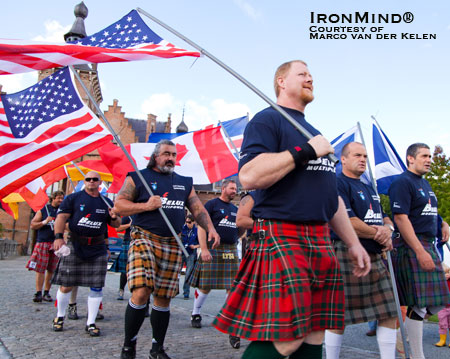 The IHGF World Pro Masters Championships was a huge success and a big attraction as the crowds flocked to Ooidonk Castle in Belgium.  In the opening ceremonies the Flemish Caledonian Pipe Band and Drums Clan Mackenzie played, followed by the official opening by the Count of Ooidonk. Also there in attendance to greet the championship lineup of athletes was the Lord High Constable of Scotland.

Several TV stations were on hand filming the championships and capturing the masters’ world hammer record that was broken by Scotland’s Aitken.

The first event with the 22-lb. Braemar stone was a very hard-fought battle between USA’s Lowther and Germany’s Deuschle, with Lowther snatching the event with a put of 41’ 6”; in second place was Deuschle with 41’ 1” and in third place at 38’ 9” was Iceland’s Gudmundsson.

The 42-lb. weight for distance was a close event between the top three athletes, with Flynn holding on to the win with a distance of 49’ 7” and Gudmundsson in a close second place with 49’ 5”.  Aitken landed in third spot with 49’ 5”.

The final event with the 42-lb. weight over the bar was won by Flynn at a height of 19’.  Lowther and Aitken tied for second place at 18’.

We extend a great big thank you to the main organisers Sabien Desmet and Tommy de Bruyn, who put a lot of hard work into this year’s event, making it the best ever traditional Games to date in Belgium.