California’s Ken Lowther returned to competition earlier this year as he won the Queen Mary Highland Games, and now he’s stepping into the thick of things as he will be joining the field at the 2010 IHGF Pro Masters’ Heavy Events World Championships, Francis Brebner reported to IronMind® today. 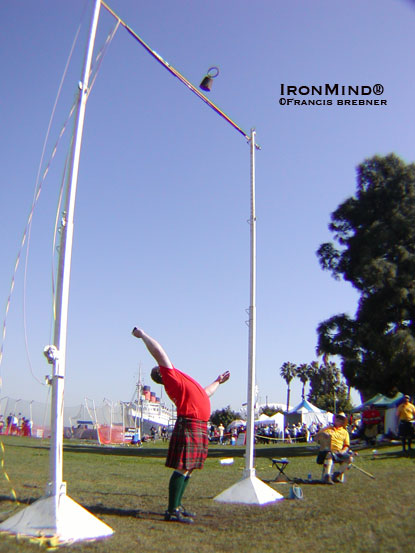 Wasting no time in showing that he was serious, Ken Lowther made a comeback at the Queen Mary Highland Games earlier this year, which he won.  Next up is the 2010 IHGF Pro Masters' Heavy Events World Championships.  IronMind® | Photo by Francis Brebner.

California’s Ken Lowther is set to join the elite group of professional masters who will be competing in this year’s IHGF Masters’ World Heavy Events Championships at Ooidonk Castle in Belgium, 28–29 August 2010.  Lowther, who made a comeback to the Highland Games circuit this year after a three-year absence, will be in the over-40s group.

Winning his first master’s contest at the Queen Mary Highland Games earlier this season, Ken also made a new ground record in the 42-lb. weight over the bar at an astounding 18’.  Ken has kept his winning form going and has won every masters’ competition that he has taken part in so far this year.

Ken, one of a handful of international (non-Scottish) athletes to win at the Royal Braemar Highland Gathering in Scotland, is looking forward to being part of such an elite championships lineup. Other big names, including Ryan Vierra, Alistair Gunn , Wout Zjilstra and Petur Gudmundsson, to mention a few, will be doing battle with Ken in the Pro Masters’ Weight-Over-the-Bar World Championships as well as for the overall title of world champion.

In association with the IHGF, Tommy De Bruyn, president of the Belgian Highland Games Federation, and his wife Sabien Desmet De Bruyn make up the dynamic dual force behind this year’s IHGF Pro Masters’ World Championships.  Both are very happy that everything is shaping up nicely for the event:  “We have been very busy organizing and we want this to be a great experience for all who attend.  We are working with an outlook of building on this year’s championships with Belgium being an ongoing location for the big event.”

To find out more about the event and its many attractions, please visit the 2010 IHGF Masters' World Heavy Events Championships website.