He's the archetypal strongman, so when Bill Kazmaier calls tonight's competitors a "smooth and cool" group, that's a pretty big compliment to the guys who will be getting one last shot at qualifying for the 2005 MET-Rx World's Strongest Man contest when they go head to head tonight in the Mohegan Sun Grand Prix. 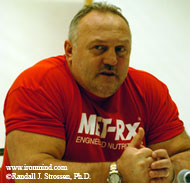 With Odd Haugen involved in event design, you know this contest is heavy: It opens with a giant farmer's walk which loads each competitor with 400 pounds per hand, followed by the Apollon's Axle for a maxium weight, just so you know that they're not wasting any time getting into the thick of things.

In addition to the young American talent that will be showcased at this contest, look for former World's Strongest Man winners Janne Virtanten and Mariusz Pudzianowski, along with top Canadian strongmen Jessen Paulen and Dominic Filliou.

Bill Kazmaier said that Pudzianowski, "is in the prime of his life" and that this contest, "is just another easy workout for him."

Tickets are still available and besides seeing what promises to be a top strongman competition, you might be able to meet the Kaz in person because rumor has it that he has been milling around a lot, enjoying the Mohegan Sun hospitality.