These are the guys who originally put the Rolling Thunder® through its paces at a family Thanksgiving gathering, and the Festivus was back in force yesterday as the Gillinghams put up some big numbers. 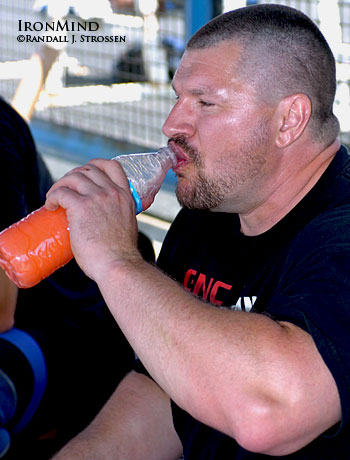 Careful with that bottle, Karl. He might look like he's just getting a little liquid refreshment at the 2007 WSMSS Venice Beach Grand Prix - where he qualified for the 2007 World's Strongest Man contest - but is Karl Gillingham really doing secret training for the Rolling Thunder®? Does beer work, too, or only sports drinks? IronMind® | Randall J. Strossen, Ph.D. photo.

Just when you think the Brits - in the form of Laine Snook and Mark Felix - are running off into the wild blue yonder with the Rolling Thunder®, who reasserts themselves, but the Gillinghams . . . in a return to the roots for this universally-recognized test of grip strength.

Karl Gillingham took top honors with a pull of 277.5 pounds, followed by Brad, at 267.5 pounds. Family patriarch and Green Bay Packer great Gale Gillingham was third, with 255.5 pounds, and the cousin Brian showed that he's no slouch either, hitting 232.5 pounds. Wade, Brad and Brian also nailed the Blob.

Karl Gillingham once told IronMind®'s Randall Strossen something like, "Dad and Wade are the top guys on grip; Brad and I just try to keep up." In this crowd, any place is a good place and being king of the hill is especially good.

Karl Gillingham's secret might sound to some like he just wisely avoided overtraining - the last time Karl touched a Rolling Thunder® was "nine months ago with Dave [Ostlund] and I hit 272," he told IronMind®.

We think it comes back to what Odd Haugen said, though, because while you can fake closing a tough gripper with a deep set, the Rolling Thunder® grants no such hiding places . . . if you're strong, you'll lift a lot on it and if you're not, you won't.

There's a reason why we dubbed the Gillinghams, "The first family of strength."