If you’re a weightlifting fan, you know the story about how Kakhi Kakhiashvili was a member of the Soviet Union’s 1992 Olympic weightlifting team, and how the coach, Vasily Alexeev, favored the other Soviet entry in the 90-kg category, Sergei Syrtsov. 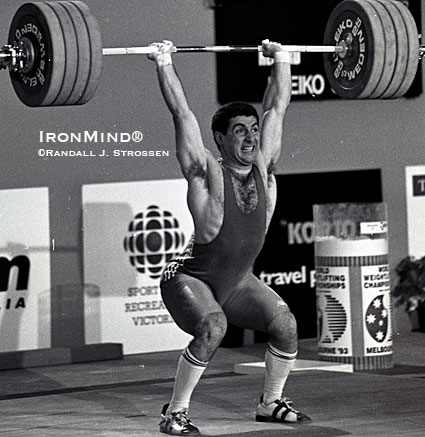 
The Soviet Union had broken up in 1991 and other than Estonia, Latvia and Lithuania, the former Soviet republics competed in the 1992 Olympics as the “Unified Team,” although old rivalries and political lines were still evident.  Thus, the story goes that Alexeev, because he was a Russian, held back Kakhiashvili (a Georgian) in the snatch, so that Syrtsov (also a Russian) could build up what appeared to be an unassailable lead.

With one attempt remaining, Kakhiashvili was turned free:  all he had to do to overtake Syrtsov and win the Olympic gold medal was equal the world record in the clean and jerk - a whopping 235 kg.  And in a story Hollywood missed, that’s what Kakhiashvili did.  Think about that - a 90-kg guy cleaning and jerking 235 kg with the force of gravity increased by Olympic pressure, and the mantle of political favoritism weighing heavily on top of all that.

The next year at the 1993 World Weightlifting Championships, I was in the training hall when Kakhi and his coach - the most esteemed Ivane Grikurovi - came in.  War and economic hardships had made them weary and the drawn look of hunger was unmistakable.  Nonetheless, the dominant feeling was that this was the pair that had won a real life David versus Goliath encounter, and Kakhi was here to lift, so they were larger than life.

Here it is, a clip spotlighting Kakhi’s workout that day, in his final tune-up for the 1993 World Weightlifting Championships, just added to the IronMind® channel at YouTube.