I was talking to 1997 and 1999 World’s Strongest Man winner Jouko Ahola yesterday, catching up since the last time I’d seen him. 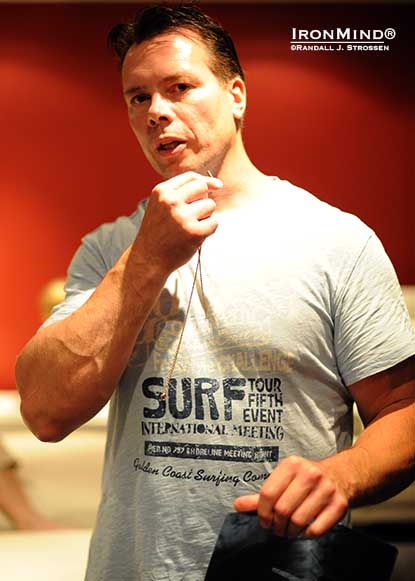 Even if you are a two-time World’s Strongest Man winner, acting can be a tough gig: after showing Jyrki Rantanen and me some film clips in his home theater a couple of years ago, Jouko Ahola explained his brush with death on the set.  The words and the x-ray were one thing, but seeing the slug and where it hit Ahola put things in a different light.  IronMind® | Randall J. Strossen photo.


Jouko said he’s been doing some more acting—in a HBO-History challenge series on Viking.  Ahola said that he is “always available” for roles, but he is fortunate to have his carpentry business that keeps him afloat financially regardless of whether he is getting acting roles.

Up to about about three months ago, Ahola said he had been training regularly, along the lines of general bodybuilding, but he’d taken a rest after a tough bout with the flu and would be starting back up soon.

“All of my roles are physical,” he said, so he has to look the part of the strong, fit guy that he is.  Currently weighing 108–110 kg, Ahola said he still does 200 kg x 20 reps in the deadlift and might be working back up to a heavy single this summer, depending on how things go.

We were talking while Ahola was watching his 10-year old son’s hockey practice—hockey, Ahola said, was the best way to make a good living as a professional athlete in Finland and his son wanted to be a professional hockey player.

In such a fiercely competitive athletic environment, I asked Ahola if his son was already involved in strength training, for example, and he said, no, that this was strictly regulated, with an eye to the young athletes’s long term development, but that his son did do some things like pushups and situps, along with his direct hockey training, plus the two of them ride motocross bikes together, which Ahola said is great training for ice hockey.