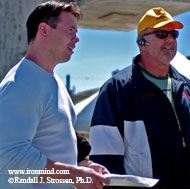 "Strongman has never seen anything like this before," Ahola said, describing the opening ceremony with "about 600 guests . . . so many Chinese athletes and dancers. You can't imagine what it was like."

And as for the 2006 WSM contest, Ahola said that based on what he has seen, "this is the best competition ever."

Pfister, an honest-to-goodness member of the Charleston, West Virginia Fire Department and a MILO® coverguy, is on everyone's short list in this year's contest, but Ahola just raised the ante another level. "Pfister has a chance to compete against Mariusz," Ahola said. While making it clear that anything can happen, Ahola tagged Pfister as the man most likely to dethrone the defending champion, Mariusz Pudzianowski, but he also sang he praises of the "old guys," Janne Virtanen and Magnus Samuelsson.

All the athletes have been testing the event equipment, Ahola said, so the stage is set for the 2006 MET-Rx World's Strongest Man contest - pick your favorite and get ready to cheer.