He’s been trying since 2009, and today Jon-Clark Eklund succeeded in officially closing the Captains of Crush No. 3 gripper. 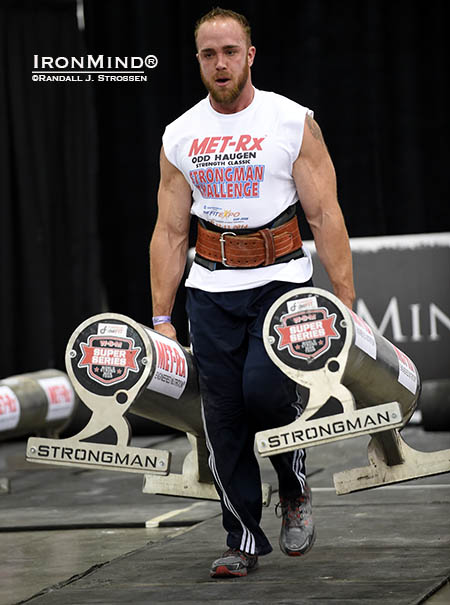 Jon-Clark Eklund won the Farmer’s Walk for distance at the Odd Haugen Strength Classic today and in between events, at the midway point in the strongman contest, he officially closed the Captains of Crush No. 3 gripper.  IronMind® | Randall J. Strossen photo


And what better place to do it than at the Odd Haugen Strength Classic, where Eklund was competing in the strongman event—after three events, including a farmer’s walk for distance (which he won), Eklund wanted to take a crack at the Captains of Crush No. 3 gripper, and he put it away—pounding it down to about a 1/4 of inch, seeming to maybe be stalled, and then finding another gear and finishing it off.

The 25-year old trains with Odd Haugen for strongman competitions and they have an agreement that whatever one of them lifts, the other one has to try to exceed.  Jon attributes a lot of his grip strength to his “Tarzan Training,” which involves hanging from a specially-made bar.

Jon works as an emergcncy room nursing assistant and is pursuing his nursing degree.  In addition to grip contests, Jon competes in strongman, Highland Games and mas wrestling.

Many thanks to Dione Wessels for refereeing on Jon’s official attempt, and heartiest congratulations to Jon-Clark Eklund, whose name has been added to the Captains of Crush No. 3 Gripper Certification List.