John McGrath picked the perfect place for his official attempt on the IronMind Red Nail—the AOBS dinner—and with that added wind in his sails, he made short work of marching through this benchmark short steel bend. 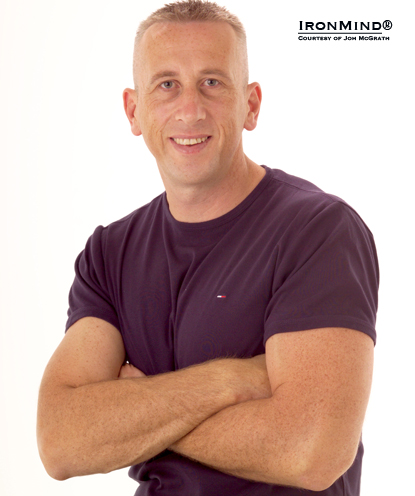 Standing about 2 meters tall and weighing 125 kg, John McGrath has plenty of horsepower for the traditional feats of strength—such as steel bending—that he prefers.  IronMind® | Courtesy of John McGrath.


Born in Ireland, “John works as a strength and conditioning coach in South Africa and has worked with many South African up and coming sportmen and women.”  John said his “passion is performing the old-time strongman feats of strength,” and he is regular performer in Capetown, South Africa.

John is also “a keen martial artist and holds four black belts and has also competed for Ireland in kickboxing as well as rowing (crew),” and he gives motivational talks to both athletes and business people.

IronMind would like to thank Steve Weiner (himself certified on both the Captains of Crush No. 3 gripper and the Red Nail) for ably serving as John’s official witness.  “It was an honor to witness such a dominating effort, as it literally took him 5 seconds to destroy this fearsome piece of steel,” Steve told IronMind.

Congratulations, John—it’s official: your name as been added to the Red Nail Roster!