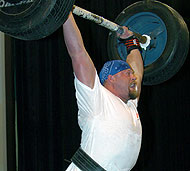 Even if you're not a longtime IronMind® customer or gripper guy, you probably know that Jesse Marunde was the first teenager to get certified on the No. 3 Captains of Crush® gripper, and in the book Captains of Crush Grippers: What They Are and How To Close Them, with the help of Jesse's grandfather, we tell the story of how Jesse built the foundation for his great hand strength at an early age.

Jesse isn't a smoke-and-mirrors gripper guy; he just clamps down and by virtue of the horsepower he has, the gripper shuts, and while Jesse is the first to say that this isn't a perfect documentary, we think anyone who sees it will be impressed.

You can see it for yourself on Jesse's web site.

And for those of you who will be in Southern California for the FitExpo, Jesse Marunde - always a favorite with the crowd - will competing in the strongman contest.