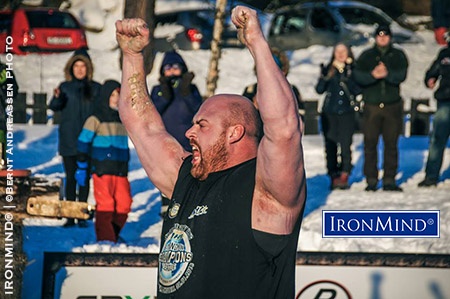 Canadian strongman Jean-Francois Caron kicked off the new year with a huge win as he was crowned World’s Strongest Viking 2016 at SCL Norway.

Up in the mountains above the little village of Vinstra, placed in the beautiful valley of Gudbrandsdalen, MHP Strongman Champions League Norway – World’s Strongest Viking 2016 was held January 29th and 30th.

This was the first stage of the MHP Strongman Champions League 2016. In total, there will be 16 stages throughout the whole year, broadcasted in 95 countries, to crown the ultimate world champion at the end.

The venue is, as it was last year, Fefor High Mountain Hotel, a hotel whose walls are filled with history of poets and kings, and an atmosphere unlike anything else. The owner of the hotel, Anne Grethe Horten, has a dream of building the ultimate strongman arena for both national and international competitions, and so far, she is on the right track. All the equipment are made with Viking as a theme, and with a Viking village as a backdrop this competition is something different from what you find anywhere else in the world.

Both athletes and audience was promised a cold experience up in the mountains, but little did the crew, arranging this competition, knew that the Norse gods of weather had other plans. They planned that a hurricane named Thor would ravage Norway this weekend, making this winter wonderland a dangerous place to be. With heavy snow as well as wind, first event was changed from Hercules Hold to front hold. This was considered a less dangerous event than the original.

At 8.00 PM, a young Viking girl opened the competition by blowing her horn, Vikings with shields and weapons were surrounding the competition arena, and the first two athletes were ready for action. A tough event became even tougher with snow blowing in the faces of the athletes, but the men were tough, and toughest of them all were Bjorn Andre Solvang, who stood for 66, 26 seconds.

After this first event, both Vikings and athletes took refuge inside while the crew got the arena ready for next day’s big competition. Weather was a theme during almost every conversation that night, athletes hoping for better weather to compete in, Vikings hoping for less wind so their tents wouldn’t fly away.
When everybody was inside the hotel, the MC of the weekend, Magnús Ver Magnússon, invited to a seminar about his life and his view of training and competing. It was a very interesting hour for all fifty in his audience.

Saturday dawned, with sunshine and less wind that the night before. In the restaurant, the athletes were eating their breakfast number one and two, on the arena the crew was finishing the last few details for the competition.   At 11.00 AM, the Vikings started to beat their drums, followed up by the same young Viking girl blowing her horn. Viking warriors ran roaring on to the arena, beating their shields with swords and axes and the competition was declared open.
First event was Viking longboat pull. A Viking longboat was to be pulled as fast as possible 20 meters. The boat itself wasn’t very heavy, but with a weighed down sleigh that froze to the ground in between each competitor the event was more than hard enough this cold winter day.

All athletes struggled with the start of the pull – except Matjaz Belsak. According to Krzysztof Radzikowski he had “spikes that he could climb Mount Everest with …“ Matjaz exploded from the start and sprinted the boat over the finish line, winning the event.

Next event was Hercules Hold. This piece of equipment was built for last year’s competition, and looks even more awesome this year after standing outside in wind and weather. Each log weighed 150 kg in the hand, and in wind that makes the temperature even lower than it actually was, this was going to be a very tough event.   The first three or four athletes really struggled with finding the balance on the platform, so they lasted for very few seconds. The fastest time of them all had Aaron Page from England, with 1,7 second. He wasn’t too happy with that result, but still; a record is a record … The winner of the event was JF Caron from Canada, who lasted 55,92 seconds in the freezing cold.

In between events two and three, there was supposed to be a break, but because of the weather and the light, crew and TV-crew decided to go on. The athletes where happy for that decision, knowing that they would be able to get inside sooner than expected, so they gave it all for the last three events.
Powerstairs was the third event. This awesome event was built for this year’s competition, and the weights was cast at a casthouse further south in the county. Three weights, weighing 185, 195 and 205 kg was to be lifted as fast as possible up four stairs, the athletes going in pairs. The crew was afraid that the weights would be too light for the athletes, but it turned out that the weights were just fine in these weather conditions. The big Swede, Johan Espenkrona, had injured his back three weeks before the competition, so he had to give in after two implements. The winner of the event was Krzysztof Radzikowski from Poland who did all three implements in 23,09 seconds.

Second to last event was Viking press. This big wooden equipment built to last year’s competition by the hotel’s own carpenter weighed 160 kg in the hands, and the athletes had to go out in pairs. The Norwegian Vikings and audience had big hopes for Bjorn Andre Solvang, who is an excellent presser. The part of the audience that cheered for mr. Page from England hoped that he would find his revenge in this event, since his major strength is pressing as well. Aaron ended up on 13 reps, and a joint 3rd place with Dainis Zargeris from Latvia. Both Matjaz and Krzysztof ended up on 15 reps, and the winner of the event was Norway’s own Bjorn Andre with 19 reps.

The last event was the event Krzysztof had dreaded the most. For weeks he had been complaining about lifting atlas stones in the cold weather, he was sure no tacky would hold the cold weather, that no stones would be lifted … so when Jorgen Skaug Aukland, the Norwegian 105-strongman,  did 4 stones, Krzysztof sighed and opened his box of tacky.

It turned out that Krzysztof was right; it was difficult to find the right kind of tacky. For all the athletes the two or three first stones went up easily, but after that the tacky froze and the stones became close to impossible to lift. The only one who managed to get up all five of them was JF Caron – who with that fifth stone could call himself World’s Strongest Viking 2016.