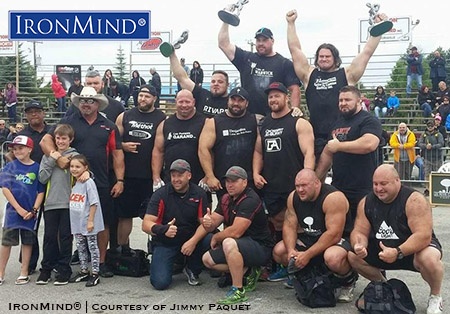 Five-time Canadian strongman champion and one of the deadliest deadlifters on the planet, Jean-Francois (JF) Caron won the Warwick Strongman Festival.

This weekend was the 12th edition of the Warwick Strongman Festival where 12 of the top strength athletes in the world (Canada, USA, Europe) battled it out for a total of $20,000 in cash prizes.

The men went through 8 grueling events over 2 days of competition.

The first event was a last man standing wheel barrow, which was won by Nick Best at 1300 lb. for 6'.

Then came the front bar viking press at 345 lb., where Vidas Blekaitis came out on top with 14 reps.

Pouring rain came right in time for the last event, the Atlas stones (250-420lb.) but the athletes then voted to do stones anyway! Due to the rain, most  athletes were only able to lift 2 or 3 of the 5 Stones. Only Martin Licis from USA and JF Caron lifted 4 stones and Caron won the event in 25 seconds, beating his American rival by 4 seconds!

After day 1 Caron led the show with a 3.5 points lead on Licis and and 8.5 points on the third position, Matiaz Belsak!

Day 2 kicked off with a last man standing 15" max deadlift on an axle bar. Starting at 800 lb. the bar went up 50 lb. at a time. Only the giant from Ireland, Sean Ohagan, missed the opening weight of 800 lb. The rest of the athletes all managed to lift the following weight of 850 lb., 3 men were successful at 900 lb. Now at 950 lb., Licis pulled out, which left only Caron and Zagiris in the battle. Both men easily lifted the 950 lb. axle! Now at 1000 lb.!!! No lift for Zagiris, good lift for Caron! Once again JF Caron proved to be one of the most dominant deadlifters im the world when the 1000 lb. looked like a warm up to the 330-lb. Canadian!

Truck pull was next on the program and only 4 men managed to finish the traditionally heavy and uphill truck pull! Once again the rain started pouring, which forced Caron and Licis to pull the truck on a wet surface with a wet rope! Blekaitis had the advantage of pulling on a dry surface which led him to win the event in 44 seconds.

The weekend finished with a brutal loading, race starting with 2 barrels of 250 lb. then 3 sand bags of 280 lb.! Five men were able to load all 5 implements on the 50" high platform, 40’ away and Caron sealed the victory when he won the last event in 1 min 3 seconds!

The competition attracted over 10,000 Strongman fans from all over the province, and that under the pouring rain!