Chiang Mai, Thailand - Things started somewhat slowly in the 77-kg class at the World Weightlifting Championships tonight, but the excitement kept building, and in the end the gold medal in the clean and jerk, and in the total, hung in the balance until the last attempt of the class. 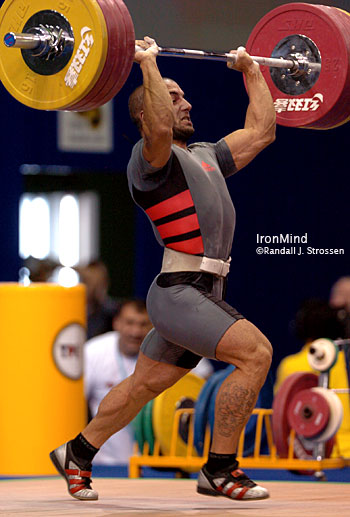 Ivan Stoitsov (Bulgaria) drives himself under 205 kg on the last attempt in the 77-kg category at the World Weightlifting Championships tonight - it was a good lift and gave Stoitsov a pair of gold medals. IronMind® | Randall J. Strossen, Ph.D. photo.

Always a factor in this category, Oleg Perepechenov (Russia) ripped through three good snatches - 155, 160 and 163 kg - and each one was done in his trademark style, up and down with the speed and certainty of a hard rubber ball bouncing. Gevorg Davtyan (Armenia) made 164, and appeared to have 167 fixed overhead on his second attempt, only to lose it at the last second. When he repeated on his third attempt, it wasn't close. Li Hongli (China), looking as muscular as ever, made 163 on his opener, 166 on his second and then sent 168 up and over on his third attempt.

Li Hongli often has trouble in the clean and jerk, or, more accurately, after an easy clean and ramming the bar overhead, he starts to shake like a leaf and then loses the lift. His first attempt, 195 kg, was just like this; and when he repeated, it was the same story. Back against the wall, his third attempt was good, and the jerk was solid for him, although just before he got the down signal, the cracks were starting to show, but he held on and got a good lift, which put him in gold medal position in the jerk and in the total.

Perepepechenov had made 190 on his opener, and he took 196 on his second, going for the gold in the jerk and the silver in the total, but he missed the jerk - as is typical of him, he almost goes straight from the recovery to the jerk. When he repeated on his third attempt, once again he rushed the jerk, and he ended up losing the bar behind, in a pretty dramatic miss.

Sa Jae-Hyouk (Korea) made 197 on his second, to become the new leader in the jerk, and his teammate, Kim Kwang-Hoon, called for 197 on his third, which he made, putting him in second place in the clean in jerk. Davtyan hit 198 on his third attempt, to become the new leader in jerk and the total. There was still no coasting at this point, because Ivan Stoitsov (Bulgaria) called for 200 on his second attempt, which he made, and once again there was a new name in the gold medal position for the jerk.

Sa Jae-Hyouk made the same 200 on his third attempt, and he leapfrogged Stoitsov on bodyweight, but Kim Kwang-Hoon thought he'd look good in gold, so he called for 201, made it, and now he was first in the jerk and fourth in the total.

There was one attempt left, and it belonged to Stoitsov and with all the changes in the lead, he simply maintained the tradition and called for 205: A good lift would give him the gold medal in the jerk and in the total, and he made a very solid success . . . especially good since he had finished the snatches in sixth place. Characteristic of the close battles for the lead, Davtyan was one kilo behind Stoitsov in the total (362), and Li Hongli trailed Davtyan by the same one-kilo margin.