Wroclaw, Poland—Is Lyu Xiaojun (China) the most electrifying weightlifter on the planet? 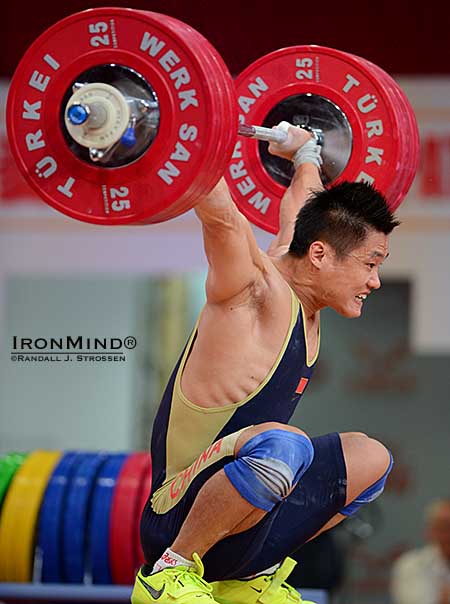 Now it was time for Lyu Xiaojun to take the stage, and he whipped through 165 kg, 170 kg and then 176 kg for three good lifts, a world record and the gold medal in the snatch.

Rasoul Taghian (Iran) lost the bronze medal in the clean jerk on bodyweight to Kim Kwang Song, who also made 196 kg, the same weight that Lyu Xiaojun opened with—if you told someone that squat jerks have almost no margin for error, so they are hard to execute, they would never believe you after watching Lyu Xiaojun because he makes the movement look effortless.  Ulubek Alimov (Uzbekistan) followed with a good 197-kg lift, to move into gold medal position in the jerk and bronze medal position in the total.

Now, with two attempts remaining, it was all Lyu Xiaojun, who took 204 kg, making another great lift, but then he pulled down the straps of his singlet—signaling that he was done for the night.