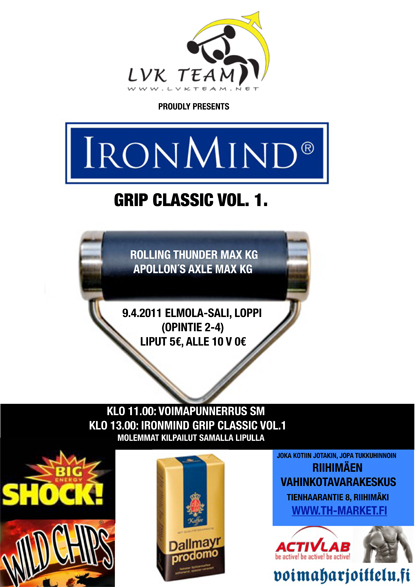 
“We believe this is the first time over US$1000 total prize money has been offered for a grip competition in Finland," said Rantanen.
Explaining what he's putting together, Rantanen told IronMind, “Classical events, good competitors, and also after the competition we´ll know how much will be the first official Finnish national record for Apollon´s Axle for men/women.

“We are still two months until the competition starts, but already we are having confirmed competitors and it´s looking that we´ll raise the number of female grip athletes in Finland with this—maybe because we are offering equality for them (the prizes are the same for both men and women).  The starting weights in each class are low enough not to stop the new competitors.

“Also, in the men’s class we are looking a great quality battlefield.  Here´s the official challenge for all Finnish grip athletes to join the party—this is your chance to make history!