In a new event for this year's strongman contest at the Arnold, a replica of the Thomas Inch dumbbell will be pressed for reps. 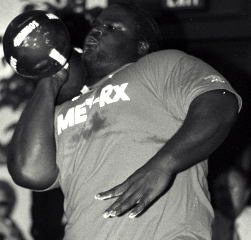 At the 2002 AOBS dinner, Mark Henry became the first man in the world to clean and press a replica of the Thomas Inch dumbbell. At this year's Arnold, one of these dumbbells will be pressed for reps. IronMind® | Randall J. Strossen, Ph.D. photo (Saddle Brook, New Jersey).

Terry Todd, Ph.D. announced that a rule change has just been made for his event, and now each athlete will simply go for the maximum number of reps from the shoulder - either hand may be used and there is a 90-second time limit.

Also in the news, MHP has become the title sponsor of the 2005 Arnold strongman contest, a move that was welcomed by NAS President/ASA Vice President Dione Wessels, who said she was "happy that they are willing to show their faith in Strongman with all their support."