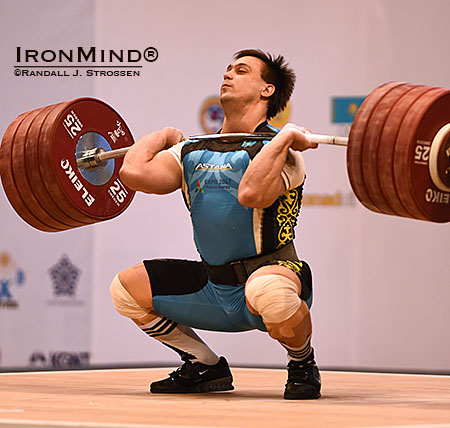 There was a superabundance of talent on the lifting platform tonight in Almaty: Simon Martirosyan (Armenia) put the first big stamp on the evening with a Youth world record in the snatch with his 183-kg third attempt success, and Nuridinov showed he had big plans for the evening when he snatched 193 kg for the gold medal.

But wait, this was just a warmup for the clean and jerk, where the weight on the bar hit the Men’s world record level with four attempts left.

Nuridinov got things rolling with a good lift at 239 kg, Bedzhanyan, who was the world record holder coming into tonight, answered with a 240-kg success, and then hometown hero Ilyin—who had missed the jerk on 239 kg—tore into 242 kg, to edge Nurudinov on bodyweight and send the packed house into a frenzy.