The iconic strongman Jon Pall Sigmarsson, "who passed away 15 years ago in his native Iceland at the very young age of 32, will receive full honors at Fortissimus 2008," Paul Ohl told IronMind®, with the details outlined in the following press release. 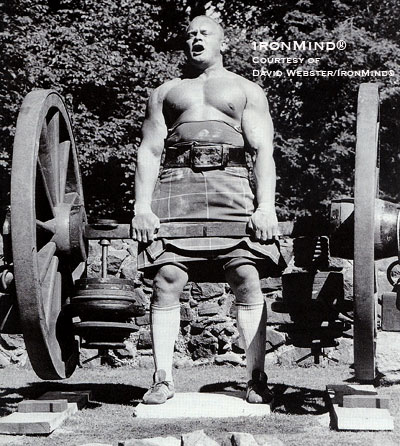 
"Not only will the four-time World's Strongest Man winner have day one of the competition named after him, but the opening event of that day will be the Sigmarsson Wheels Deadlift, and the very last event of the competition, the Circle of Stones, will also emulate Jon Pall's original stone lifting style."

"That first event will recall and celebrate one of strength's historic achievements as Jon Pall Sigmarsson established a memorable world record. In 1987, at the Pure Strength Ultimate Challenge Competition held at Huntley Castle in Scotland, Sigmarsson defeated both Bill Kazmaier and Geoff Capes at the Giant Wheels Deadlift, the last event of the competition. Both Kazmaier and Sigmarsson had gone over a 455-kg (1005-lb.) load. At the seventh attempt, Jon Pall Sigmarsson raised 523 kg (153 lb.), establishing the world record and winning the competition. That record still stands."

"In addition, the competitor who will complete FORTISSIMUS with the highest combined poundage for the ten events will be awarded the Jon Pall Sigmarsson Strength Award along with a bonus money prize."