Due to a typo, it was originally reported as weighing 3200 kg, a bear of such astounding reputed proportions that a New York attorney who routinely handles weighty matters (David Barron) was quick to question the veracity of the report, and then strongman aficionado Paul Ohl correctly surmised that an errant zero was likely, but even if weighing a svelte 320- kg, the bottom line remained unchanged: The strongman competitors at the IceMan II deadlifted a bear! 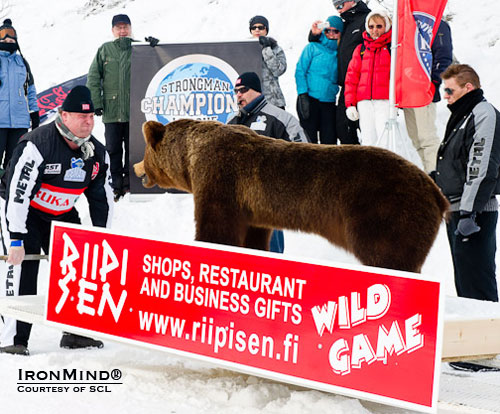 “Paul, you are correct there was one 0 too much.  The correct weight was 320 kg. The Bear was not a alive one.  The most weight was hidden under the bear, anyway for IceMan competition done in Lapland outside where actually has a lot of bears; event done by that way fit excellent,” Ilkka Kinnunen explained on the IronMind Forum.  That's Zydrunas Savickas shown repping out on the Bear Deadlift.  IronMind® | Courtesy of SCL.


What are the bear facts, here, we wondered, so IronMind turned to contest organizer Ilkka Kinnunen for the rest of the story.

“In athlete meeting I told the athletes that you will be lifting Finnish National animal: brown bear.  Some athletes started to ask if the bear is in cage and how close it will be.

“I couldn’t help myself to tell small white lies that you have to be careful and not to put head too close or bang the machine down too fast to make the bear angry :-)

“Misha gave a good comment that when bear shouts [growls] it will for sure give extra energy for lifts :-).”